On December 7, 2008, public relations director of Nepal Electricity Authority (NEA) declared that electricity users in Nepal will be facing load shedding for next 5 years. And, as NEA had proclaimed in its latest annual report, that “it is envisioned that Nepal would be power surplus by year 2013/14,” one is led to believe that the electricity users will have to suffer for the next 5 years only and after that there will be no load shedding. What a relief! In the capacity of a consumer suffering from the vagaries of the load shedding, one would wish luck to NEA so that it will be able to keep its promise.

The reason for the respite given in the annual report was the implementation of projects, totaling 525 MW by NEA and 281 MW by the independent power producers (IPPs) by 2013/14 [1]. Following is the list of projects that NEA envisages to be commissioned by 2013/14: 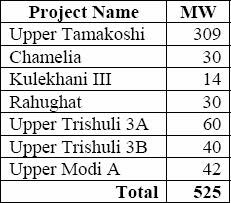 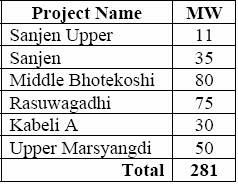 In this manner, between NEA and IPPs, Nepal’s power system will see an addition of 806 MW by 2013/14. After the commissioning of Middle Marsyangdi this month Nepal’s current total installed capacity will be 687.38 (617.38 plus 70) MW and after the implementation of the above mentioned projects, the total anticipated generation capacity in the system will be 1493.38 MW by 2013/14.

Let’s now make an attempt to examine if NEA will be able to keep the promise. According to the load forecast of NEA the peak demand in 2013/14 will be 1271.7 MW and as the total capacity in the system will be 1493 MW, superficially at least, it would seem that there will not be any need for load shedding in that year. However, even the ordinary consumers (without understanding the technicalities of electricity generation) have come to learn the hard way that during the dry season (when the demand for power reaches its peak) hydropower plants do not generate to its full capacity. Therefore, in the promised year 2013/14, the peak demand will be 1271.7 MW while with the total installed capacity of 1493.38, NEA will be able to generate only in the order of 7-8 hundred MW during the dry season. Therefore, it is rather obvious that the promised respite from load shedding in that year is almost a pipe dream due to an anticipated shortage of over 400 MW during the dry season.

Moreover, it also needs to be remembered that commissioning of 525 MW by NEA by that year will depend on timely completion of the implementation of the specified projects. NEA, unfortunately, does not have a track record of completing its hydropower projects without incurring significant time overrun since the days of Kulekhani which becomes clear from the following table.

Furthermore, the above table also anticipates addition of 281 MW by the private sector. For this purpose the private investors need to able to execute power purchase agreements (PPAs) with NEA. From the information available till now, no PPA has been signed with any of the projects listed above. In view of this the likelihood of adding 806 MW by 2013/14 is rather remote.

To conclude, it is absolutely clear that even if the projects anticipated to be commissioned by NEA are indeed completed, the load shedding problem will continue to dog the electricity users due to the anticipated shortfall of over 400 MW in 2013/14. If the projects included in the list fail to be commissioned in time, the magnitude of load shedding even in 2013/14 will be higher. This indicates that there is something seriously wrong at various levels like, comprehension of the problem, planning to mitigate the problem and also in the implementation of the projects.