Indian Prime Minister visited Nepal last week and laid foundation stone of Arun 3 hydropower project, 900 MW, jointly with Nepal’s PM, “online”. PM Oli has been stressing ad nauseam that he is not a capitulationist. But implementation of Arun 3 project is manifestation of just that: capitulationism in him.

Export-oriented project
It is expected to generate 4,018 GWh energy and under section 11.16.1 of Project Development Agreement (PDA), signed between GoN and the developer of project, Sutlej Jal Vidyut Nigam (SJVN), Nepal is to receive 21.9% energy (about 879 GWh) free of cost and 3,138 GWh to be exported.

There is provision for export of free energy in section 11.16.4 and 11.16.5, while there is complete silence with regard to consumption of the free energy in Nepal. Hence, it is clear that whatever electricity is generated by it, all of it will be exported.

Nepal is yet to achieve self-reliant energy security, which can only be achieved by setting up energy intensive industries, displacing imported petroleum products by electrification of transportation and so on. Achievement of energy security and export of power generated as such is mutually exclusive. Nor does Nepal have electricity surplus, to be contemplating its export.

For lack of employment in Nepal, Nepali youth are migrating abroad, which could have been mitigated by industrialization in Nepal, but for unavailability of energy. Lack of industrialization has negative multiplier effect on Nepal’s economy: rampant unemployment, fatal dependency on import, balance of payment and trade deficit, treasury deprived from potential source of revenue, etc.

On the other hand India will use electricity from this project to set up industries and youth from Nepal will get employed there as laborer, coolie, etc. and get exploited.

In this backdrop it is sheer foolhardy to deprive Nepal from multiplier effect by exporting electricity from Aurn 3.

Resource Colonization
Resource colonization has become a rare phenomenon in modern days. However, innovative ways are being devised for colonization of resources. An example is export of primary commodities at dirt-cheap price, which manifests in planned export of electricity from Arun 3, thereby depriving Nepal’s economy from much needed electricity – a modern source of energy – and perpetuating dependency on fossil fuel in the meantime. It will be silly to oppose export of electricity if Nepal’s demand, including latent demand to displace energy source ranging from fossil fuel (modern source of energy) to biomass (both unclean) for electricity is met to saturation level. Unfortunately, it will be sheer foolishness to assert as such at the moment.

Mirage of Benefits to Nepal
Protagonists of implementation of this project salivate at the potential benefits that Nepal supposedly stands to benefit, ranging from 197 MW free electricity worth Rs 155 billion to financial benefits of Rs 107 billion in royalties, Rs 77 billion as income tax and 9 billion as custom duty and VAT; a handsome total of Rs 348 billion within 25 years of “concession period”. Let’s examine the validity of such claim.

Free energy
Nepal is slated to receive 21.9% as free energy, claimed to be 197 MW by Investment Board of Nepal (IBN). However, it should not be forgotten that as a run of the river project, its generation in dry season would be around 300 MW only. Therefore, free energy to Nepal would be around 70 MW in dry season of up to 8 months and 197 MW in rainy season that lasts about 4 months.

IBN has estimated that revenue from free energy will be Rs 155 billion, which is not correct. It will amount to Rs 110 billion only.

Rs 107 billion from royalty
IBN has estimated that Nepal would earn Rs 107 billion as royalties from it, which too is incorrect. According to section 11.26 of PDA, capacity royalty is Rs 400/kW for first fifteen year and Rs 1,800/kW from 16th year through 25th year. At this rate Nepal would earn Rs 12 billion in capacity royalty over 25 years. Similarly, rate of energy royalty in first 15 years is 7.5% and 12% from 16th through 25th year. Thus, energy royalty in 25 years will be Rs 19 billion if electricity is exported at Rs 5/kWh. Total revenue to GoN from royalties in 25 years comes to Rs 31 billion. The export rate will have to be Rs 25/kWh in order for Nepal to earn Rs 107 billion in royalties. Which is well neigh impossible!

It is possible that IBN clubbed even export tax revenue. But under section 9.3 of PDA, the rate of export tax is only 0.005% and revenue therefrom comes to Rs 20 million only in 25 years.

Income tax
Estimated cost of this project is Rs 104 billion and debt to equity ratio is 75:25. If average rate of net profit before tax is 40%, Nepal will receive only Rs 26 billion over 25 years. Because under section 3.2.4 of PDA, the project is exempt from income tax fully for first 10 years and it is entitled to 50% rebate from 11th through 15th year.
Rather, Nepal’s treasury stands to lose Rs 26 billion due to above-mentioned income tax exemption and rebate.

VAT and custom duty
IBN claim that Nepal would receive Rs 9 billion from VAT and custom duties is also incorrect. Pursuant to section 12(7) of Electricity Act, the project is exempt from VAT on import of plant, machinery and equipment and these attract only 1% custom duty. Due to these exemptions Nepal’s treasury will be deprived of estimated Rs 14 billion.

Whereas, in accordance with section 9.2 of PDA, the project is entitled to grant of Rs 5 million per MW; totaling Rs 4.5 billion. IBN has not disclosed this facility to public, among others.

The project is also entitled to 50% custom duty exemption on import of cement, steel bar, etc. It is expected to cost Rs 5 billion to Nepal’s treasury.

Benefit and opportunity cost
Total benefits that accrue to Nepal as analyzed above totals Rs 176 billion only, even including Rs 9 billion from custom duty and VAT.

However, IBN is silent with regard to direct costs and opportunity costs to Nepal’s economy. Opportunity costs are (1) Rs 26 billion in income tax exemption, (2) Rs 14 billion in VAT exemption and rebate on custom duty on plant machinery and equipment import and (3) Rs 5 billion due to custom duty exemption on cement and steel bar. Additionally, Nepal has to pay Rs 4.5 billion to the project for having paid VAT.

In sum Nepal stands to receive Rs 176 billion while the costs to Nepal is Rs 49 billion. Net estimated benefit to Nepal is Rs 126 billion only. Not whopping Rs 348 billion!

Devolution of ownership to GoN
Proponents of this project take solace in the fact that its ownership will devolve to Nepal after 25 years. It is comparable to the practice rampant in western Nepal under which a family gives away a daughter to the lender against loan taken, till repayment of the loan; known as Kamlari practice. The girl will practically spend her entire life working for the loan shark and will return to family in old age. Electro-mechanical equipment of this project too will be useless in 25 years. Besides, Nepal needs electricity right now to achieve self-reliant energy security.

Some experts take consolation in the provision of section 11.17.2 of PDA under which Nepal can buy up to 10% electricity. However, it will amount to only 70 MW in wet season and around 30 MW in dry season. Almost like a drop in the ocean in view of Nepal’s need.

From Arun 3 to Arun 3
Some people are still lamenting the fact that the World Bank cancelled 201 MW Arun 3 in August 1995. But that cancellation was in Nepal’s interest. Because the estimated cost was Rs 560/MW (cost overrun could have pushed it to Rs 800/MW), very exorbitant compared to the cost of this one: Rs 110/MW. Had that been implemented, brokers, peddlers, politicos and bureaucrats would have skimmed off amongst themselves Rs 400/MW.

Besides, the World Bank had imposed a covenant under which Nepal was proscribed from undertaking any project larger than 10 MW. Therefore, due to cancellation of that project Nepal succeeded to build Modi (14 MW), Kali Gandaki A (144 MW) and Middle Marsyangdi (70 MW) under NEA. Similarly, private sector implemented Khimti (60 MW), Bhote Koshi (45 MW), Chilime (22 MW) and Mai Khola (22 MW). In this manner due to cancelation of 201 MW project, 377 MW got added to Nepal’s system.

It is not to say that Arun 3 should be cancelled once more. Ground reality needs to be understood. Nepal doesn’t benefit from this project by Rs 348 billion in 25 years. Net benefit is only Rs 127 billion. Whereas Nepal would be deprived from benefit from multiplier effect of Rs 9,141 billion. Therefore, Arun 3 needs to be liberated from resource colonization. 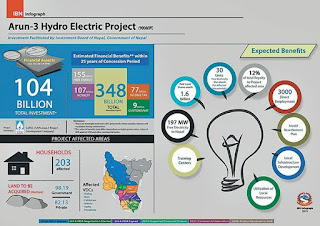