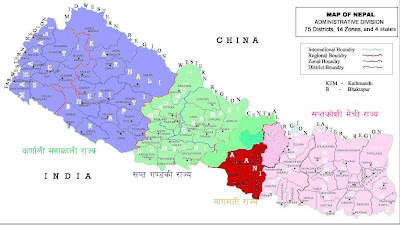 Re: ADB pulling out of West Seti project

Depends on which from which perspective you are looking at it. There are people everywhere in my analysis.

I could keep in going on but I will have to repeat all the things I have written in the article which does not make sense.

I am amazed at your failure to see it. I urge you to read my article more carefully.

Subject: Re: ADB pulling out of West Seti project

Where are people in yiur analysis

Posted by Ratna Sansar Shrestha at 7:37 PM No comments:

Re: ADB pulling out of West Seti project

Thank you so much for reverting back, even on a Sunday and amazingly so promptly, to me.

Thank you very much for your mail. We will also look into your points as part of our ongoing review.

Two mainstream vernacular dailies (Gorkhapatra yesterday and Nagarik on Friday) have reported that ADB is pulling out of West Seti project. We in Nepal would appreciate it if you could confirm the news.

I have been closely studying this project since some time and in my considered opinion this is “one of the best projects of its genre, because it not only generates peak-in energy – good quality power – but also does so at low cost and its implementation, further, results in flood control and dry season augmented flow for lower riparian areas. Moreover, export of hydropower to India from this project results in carbon offset benefit which is tradable in the carbon market and has potential as a good source of revenue.” However, all these benefits don’t accrue to Nepal. My article on this was published in Issue # 5 (July 2009) of Hydro Nepal (journal of water, energy and environment)” which is also available at blog (available at following link):

I firmly believe that this project should be built. However, it should be built such that Nepal uses the low cost peak-in energy for the industrialization of Nepal from which employment could be generated at the higher plane (not just to mitigate the problem of load shedding here) and head toward becoming a self reliant economy (for commodities like cement). Even “10,000 MW task force” has concluded that by the time this project is commissioned Nepal will be in a position to use most of the energy generated by this project. Moreover, Nepal should use the augmented flow to increase cropping intensity in over 250,000 hectares of land in west Terai thereby contributing to the achievement of food security.

Re: Federalism and Peter Galbraith

Good to hear from you.

Let me start by agreeing to disagree with you on a few things you have said.

First of all I don't believe in communism, nor in socialism. Besides, having closely watched the work of communist parties in Nepal, both in the government and out of it, I also have reason to believe that they merely pay lip service to communism and socialism but do what is told them to do by others, including multilaterals. Neither Nepali congress adopted socialistic policy nor communist parties.

Similarly, I don't agree that federalism is relevant for Nepal; although I have had my "education" on federalism and am aware of its positive sides. If we are to follow what UCPNM is saying in this respect we will end up with more than 75 ethnic provinces - it will be like committing hara-kiri as Nepal is too small to sustain that many provinces.

I think Nepal needs to be alert to ensure that we don't have our own "Galbriath" who are advocating disintegration of Nepal in the name of federalism.

I agree with you on neo-colonialism, though. What I have seen is most of the political parties take their instructions from India, mainly, and this too is a form of colonialism.

I was also going through the news of Peter Galbriath in the media. While appreciating your effort on exposing the ill motives of the foriegn advisor like that of "Peter Galbraith" I see the issue a bit different and broader way.

Majority of the people of middle class or bourgeois class understanding is that only western style of democracy is true democracy and if some body talk off the track of "western democracy" they are branded as "leftist, communist, radicles" etc. And the political parties or groups who serves interest of 'Galbraiths" are considered as moderate, democrat, liberalIn fact. Development in Nepal during and after so called democracy movement could be fitting example of the trend.

In majority of the events of so called democracy movement, there were vested interest of "Peter Galbraiths" to capture resources of the third world countries. The issue may ranges from "democarcy", "federalism", "human right", "terrorism", "religious freedom" etc. Starting from eastern europe, Romania, Chech, Poland, previous soviet states, and South American countries like, Chile, Paragua, Nicaragua, Hondurus, Venezuella and Asian countries like Iraq, Syria, Pakistan, Afghanistan etc, these "Galbraiths" had role to capture the resources of the country in question. In otherwords, it is what called "neo colonism".

I am hopeful of building a self defended and prosperous Nepal if the learned person like you well tries to learn from the history and defend our motherland and society from "neo colonism".
With best regards,

The attachment is very revealing in as much as why a foreigner wants to have a nation go federal. No wonder we have a multitude of INGOs (with our own version of Peter Galbraiths) advocating restructuring of Nepal on ethnic lines.

I trust we could learn a lesson or two from this.

Federalism in Nepal and Peter Galbraith

Thanks for reverting back.

I am not against federalism per se. But, in my considered opinion, what is being imposed on Nepal – a tiny country – does not augur well. Fragmentation of Nepal into over 75 provinces in the name of ethnic federalism is a nightmare scenario. I hope you don’t mind my criticizing UCPNM in this respect, because that party has nominated you to CA. I have been openly critical of them and others who advocate ethnic federalism for Nepal. I have had debate even people like Dina Nath Sharma in a forum where I presented a paper on the subject. I am hoping to have an interaction on the matter with people like Prachanda and Dr Bhattarai.

I am sure that you would like to point out an error in my statement above about 75 provinces as parties like UCPNM are asking for only about 17 provinces. But with the formation of provinces for about 10 ethnic groups, other ethnic communities will definitely ask for level playing field and we will soon have actually more provinces, not less.

Being a student of law and due to my own interest I have studied quite a lot about these issues, including governance. There is no direct bearing of federal structure on governance issues. No one in the right mind will disagree that the weakness in the governance needs to be dealt with. But under federal structure, instead of one unitary country, we will end up with several provinces with weak governance.

Junior Galbraith is definitely dishonoring the good name his father had earned. But GREED has no barriers in terms of color, geography, religion, et al. I know of many a famous people, within and without Nepal, who give in to greed, knowingly or unknowingly. I know of many a rich people who, in their quest to hoard more, succumb to greed forgetting about human decency, what they owe to their motherland, that their own prestige may be at stake, including prior commitment they have made. I guess junior Galbraith is no different. My concern here is: whether and if we have our own Galbraiths (Nepali or expatriate) who are angling to profit by pushing this country into disintegration in the name of federalism.

I too am sad but for senior Galbraith. He must be turning in his grave! God bless him.

I enjoy and learn from your viewpoints and writings provoking a good debate, including one on Federalism recently. We need not be totally against federalism if it is well thought out and constructed to address the weakness of governance issues.

I did not know Peter Galbraith was the son of John Kenneth Galbraith whom I greatly admire for his wit and writings. He was one of the shining knights of the JFK Camelot years. If true, I am sad to read about Peter Galbraith's misuse of power for personal gain.

The attachment (copy pasted below) is very revealing in as much as why a foreigner wants to have a nation go federal. No wonder we have a multitude of INGOs (with our own version of Peter Galbraiths) advocating restructuring of Nepal on ethnic lines.

I trust we could learn a lesson or two from this.

Good to hear from you.

You must have been responding to my emailed response to Ambika Adhikari on the captioned matter, but you didn’t copy your email to him.

If you have read my writings that have been circulated by NNSD you will realize that I don’t merely contribute on "load shedding". I do write on a variety of topics and mainly concentrate on water resources. The captioned article is neither related to load shedding, nor water resources. My aim in writing is to start a healthy discourse/dialogue and I am always particular in taking a balanced approach in my writings and, therefore, stay neutral. I tend to write from the perspective of our national interest and there is hardly scope for being branded as non-neutral for speaking on behalf of the motherland.

Take the case of the captioned article (I pity that the members of NNSD have been deprived from reading it). One of the purposes of my writing this article is to de-construct of the myth of Bahunbad perpetrated by the likes of Dr Krishna Bhattachan who have been aggressively demanding fragmentation of our motherland hoping to uplift ethnic communities from the “tyranny of Bahunbad”. Actually the article is based on my notes prepared to speak in GAA forum on federalism last Thursday in which besides him, Dr Shankar Sharma and Jainendra Jivan joined me in the panel. On the other hand, Newars (you do realize that I am a Newar, too) too seem to agree with him with few exceptions like yours truly. Therefore, it is very important for the intellectuals of Nepal to know that all Newars don't want fragmentation of this country and I am sure that there are many prominent people from various ethnic communities who see eye to eye with him but don't dare to speak out. Unfortunately, they (members of NNSD) didn't get to read my thought provoking article. Otherwise, it would have triggered a much needed and healthy dialogue on federalism and whether it is appropriate for such a tiny country like Nepal. Too bad!

Take care and keep in touch.

Ratna Sansar jee:
Highly appreciated your contribution on load shedding in the past. As you know, we strongly encourage neutral and unpublished views and healthy dialogues. I do expect the same from all members to maintain the standard of NNSD as ever. You are always welcome.