Ethnocentrically (based on ethnicity, culture and language) I am a Newar. Amongst Newars there are Hindus and Buddhists (some even profess Islam and Christianity). However, most importantly, I am first and foremost a proud Nepali, only then a Newar.

Fragmentation of our motherland in a number of (about 10) ethnocentric state is unacceptable as it will be unfair on remaining 90 ethnocentric groups (anthropologists have opined that there are over 100 ethnocentric groups in Nepal) in whose names no states are being proposed. This will invite ethnic conflict which a small country like ours cannot afford. Just look at the reaction of Sherpa CAs.
Moreover, the proposed state restructuring, under which as a Newar I will become a privileged class in Newa Rajya, is also unacceptable as other Nepali citizens living in proposed Newa Rajya will become second class citizen. Conversely, the proposal will render Newar people in places from Jumla to Taplejung second class citizen and, hence, is unacceptable. In this age and time, a proposal to relegate a Nepali citizen to second class citizenship in Nepal itself is against the basic tenet of fundamental human rights. This too has potential to cause ethnic war. After losing over 20,000 Nepali youth in the “people’s war” we cannot afford to lose additional thousands by inviting ethnic wars in this manner.
I have also learnt that in the state restructuring being proposed there is a proposal that a particular ethnocentric group will have special rights with regards to governance of that state. Meaning, Newars will have special rights with regards to governance of Newar Rajya. However, in the proposed Newa Rajya, Newars comprise less than 50% and this will mean that minority will rule over the majority. In this manner in almost all ethnocentric states majority will be “ruled” by minority. This too cannot be acceptable in this age and time.

In my considered opinion we need to go for state restructuring on the basis of our 3 major river systems, Sapta Koshi, Sapta Gandaki and Karnali as follows which will ensure optimum exploitation of Nepal’s water resources (please note that I am not referring to just hydropower) which hasn’t been possible so far as present unitary centralized system isn’t focused on this:﻿ 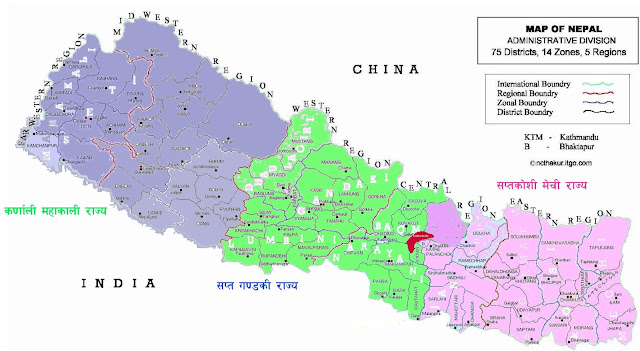