FDI in Hydropower and Choice of Jurisdiction

Nepal is facing severe energy crisis, not only in regard to electricity from hydropower but also with other energy sources such petrol, natural gas, and coal. Because nature hasn’t endowed Nepal with these minerals, Nepal has incurred a huge balance of trade deficit as imports have been surpassing exports many times over. The balance of trade deficit was more than Rs. 600 billion in last fiscal year (import more than 6 times of export). The import of fossil fuel alone contributed Rs. 140 billion to the trade deficit while import of electricity amounted to Rs 8.25 billion. (It is indeed strange that a country deemed rich in hydropower is having to import electricity from India!); These deficits are putting pressure on balance of payment as well.

At the end of the most recent fiscal year, the Nepal Electricity Authority (NEA) system had only 787 MW installed capacity while peak demand for Nepal was 1,200 MW. NEA supplied 458 MW from its own sources and 216 MW was generated by independent power producers (IPPs) and 116 MW was imported. However, in spite of the imports, there was a shortfall of 410 MW. Meanwhile, another 700 MW power was generated from standby generators, which required imported petroleum products for operation. All told, still, only 45% of the population had access to electricity supplied by NEA while industries need additional 1,000 MW (an estimate) to operate at full capacity and to enable new industries to be established.

If Nepal could generate enough hydroelectricity to meet its current demands, we could reduce the trade deficit by making LPG for kitchens and diesel for irrigation pumps unnecessary. Currently there is a 1,000 MW demand for kitchens and 700 MW demand for irrigation pumps. The electrification of transportation, which would require another 500 MW, could also help reduce petroleum consumption. This would also reduce our balance of trade/payment deficit. Considering all these needs together, Nepal will require an additional 5,000 MW of energy. And, in five years time, that requirement will double if we are to achieve normal economic growth. Current demand projections have been made under suppressed economic growth scenario. Nepal will need a higher quantum of electricity to achieve accelerated economic growth, which would be needed to elevate Nepal from the status of “developing country.”

Nepal has been endowed with ample water resources. This potential could be harnessed to meet our current energy needs and also to export. But hydropower projects are capital intensive and entail long gestation period for construction and installation/erection. Investors often cannot recover their investmnet and return thereon until after the projects are commissioned and debt service obligation has been fully met.

Therefore, proper and timely financing is key to the solution of Nepal’s balance of trade deficit and energy problems. Although sufficient funds for hydropower development can be mobilized from within the country, foreign direct investment (FDI) also has an important role to play in harnessing hydropower potential.

FDI and Lack of Confidence in Nepal’s Legal System
Nepal’s legal system is a leading obstacle to foreign investment. Many foreign investors do not have confidence in Nepal’s legal system: its body of law, the judiciary, and legal experts. Foreign investors insist on being afforded right to choose foreign jurisdiction, which means that all associated hydropower documents and agreements (project development, power purchasing, loan documentation) are governed by the law of a specific foreign country for settling potential disputes.

Choice of Law to Govern Documents
Prior to the amendment of the Foreign Investment and Technology Transfer Act (FITTA) in 1996, the choice of law to govern documents related to foreign investment was not exercisable even if a project was financed with FDI. However, as it was not expressly prohibited anywhere in the law, except for activities under FITTA, involving foreign parties, the liberty to choose existed per se, but enforcement of the same was dubious for lack of legal mandate.

In this backdrop, it was deemed imperative that FITTA be amended to afford choice of governing law to foreign investors (sponsors of Khimti project, at that time, insisted on choosing foreign jurisdiction) so as to make investment in Nepal more attractive. Therefore, FITTA was amended by adding Subsection (4) in Section 7, which stipulated that “disputes arising in regard to foreign investment made in the industries with investment as prescribed may be settled as mentioned in the foreign investment agreement.” In this manner it became possible to choose foreign jurisdiction when foreign entities are involved in industries above a certain level of capitalization (in the case of Khimti project, for example, Norwegian jurisdiction was chosen for construction/supply contracts and New York law for loan documentation, while the Project Agreement and power purcase agreement (PPA) were governed by Nepal law). FITTA is also clear that no such choice is available in the case of agreements where no FDI is involved.

Settlement of Dispute by Arbitration
Arbitration is one of the courses available for settling disputes. With the adoption of New York “Convention on the Recognition and Enforcement of Foreign Arbitral Awards, 1958” by the Government of Nepal, foreign arbitral awards have become enforceable by courts in Nepal. Section 34 of the Arbitration Act, 1999 has a provision for this purpose under which arbitral awards delivered in countries that lack reciprocity with Nepal cannot, however, be enforced in Nepal. Similarly, if the dispute concerned cannot be settled through arbitration under the laws of Nepal and if implementation of arbitral award is detrimental to public policy, such arbitral awards too will not be enforced in Nepal.

In this manner, a foreign investor in a hydropower project in Nepal has been afforded liberty to choose to settle dispute through arbitration held in foreign country under the laws of that country. And there is provision for Appellate Court of Nepal to enforce arbitral awards.

The aggrieved party in a hydropower venture with FDI is at liberty to approach the judiciary of the country whose law has been chosen to govern the document. However, enforcement of a foreign court’s judgment in Nepal is not possible under the existing legal environment. Therefore, the whole exercise of getting the judiciary of a foreign country to hand down a verdict to settle a dispute in Nepal is meaningless because verdict will not be implemented in Nepal.

Choosing a foreign jurisdiction also entails having Nepal’s judiciary settle the dispute in accordance with the foreign law chosen in the agreement. But application of a foreign country’s law by a Nepali Court for the settlement of disputes is untenable since it would require Nepali judiciary having facile knowledge of the law in many foreign countries. If judgments under foreign law are to be allowed in Nepal, our courts will have the unenviable and onerous task of interpreting the laws of foreign countries written in foreign languages. At present, Nepal’s courts generally don’t even accept documentation in English.

Moreover, adjudicating litigation that arises out of an agreement governed by foreign law by a Nepali Court by applying Nepali law is also likely to be out of the question. In other words, if a foreign investor has chosen a foreign jurisdiction, such an investor may even be precluded from having the dispute settled by courts in Nepal because it is likely that Nepali courts may refuse to rule on a dispute related to a document written under a foreign jurisdiction. In the present set up of our judiciary structure, the first reaction of a judiciary could be to tell the parties to seek the assistance of the judiciary of the country whose law governs those documents. There are no known precedents in Nepal in this respect. And it is yet to be tested in Nepal’s judiciary. However, an Indian Court reportedly refused to adjudicate a dispute arising out of a document governed by Japanese law; the parties were told to have the dispute settled by Japanese Court.

Our current legal situation is illustrated by following diagram. 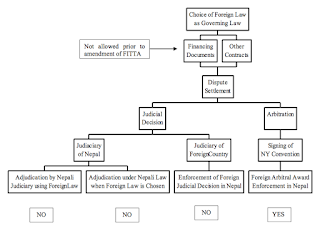 Published in Issue No. 16 of Hydro Nepal Journal of January 2015
Posted by Ratna Sansar Shrestha at 8:50 PM

Is it possible to have a session with you regarding the obstacles for FDI in hydropower sector?